An oversize Doric from the Wahl-Eversharp had been staying on my purchase list for quite a long time. The trigger was one forum post from a senior collector of American pens in China. Among all the variants of the Doric, the second generation with subtle mesh pattern is my favorite. The architecture-alike trim style and the excellent nib unit from the uproaring age of Eversharp were just killing me.

But then came the old issue when buying a notoriously famous vintage model: those fit your criteria always can’t fit in your budget. To get the one I want, I need to put down at least 500 dollars! So, each time I saw it during a pen show visit, I could only hold it in my hand as long as I can and put it back.

In the last afternoon of the Baltimore/Washington Pen Show this year, I got deviated by a strange Doric before moving to purchase my first Franklin-Christoph. It was a pen with an extra slim build, but I could tell it was an Eversharp and probably one of the Doric lineups due to the looks of its facets and trim. One step forward and my assumption was grounded: there was an EVERSHARP trademark struck into the clip, though the double check mark was not offered. Mind you the price tag I just noticed: just over 200 bucks.

The owner, a gentle man wearing a stone color reporter vest, was watching at me with a smile, “Fill it up, try it out! It has got a flexible nib!”

I got the pen, uncapped it. The narrow nib, though also restricted in width, did has an elegant length. I dipped it gently into an ink bottle prepared at the other end of the silver-balloon-decorated booth, post the cap, and began to gasp. This pen holds comfortable in hand despite the thin barrel, and it wrote amazingly firm and smooth when I treated it like a regular B pencil, but most importantly, it flexed and reacted just like a strong spring when I pushed it! If this is a hot hatchback, to flex it and show its maximum potential is just like let the turbocharger to cut in and man, then you got such incredible amount of fun!

So I bought it. The gentleman behind the booth was John Corwin, whom I later realized was the pen show exhibitor who was known for selling “wet noodles.” John pulled out his notebook from one of the pockets in his vest and scribbled down the contact and order information of my purchase.

Not a Doric? I hesitated for a moment, but look down what I got in hand; I found that doesn’t matter anymore.

The actual name of this pen, according to someone with the original ad for this pen, should be the “Streamline.” However, this doesn’t mean John’s version of name holds no ground, cause other unofficial names such as the “Slim Doric,” or “Stenographer” (this one from Syd Saperstein) were also widely used to denote this pen. For the convenient of the review, I want to call this pen a Stenographer in the following texts.

According to Syd, the base material of this Stenographer is a kind of celluloid called Pyroxalin Plastic, aka Pyralin, which was provided by the DuPont Viscaloid Company in the 30s. The pattern of the celluloid was “medium charcoal grey with white flecks.” That is a well-thoughted design for a fountain pen built mainly for the office works, and when coupled with its super slim body with four facets, it arises the word exquisiteness from my vocabulary without second thoughts.

Slim pens are nothing uncommon in that era, but this Stenographer sets out from them quickly, also thanks to its Doric-inspired trim and facets style. The clip was the same as one a regular Doric would have, with a tiny “MADE IN U.S.A” on the top face of it, and the double cap rings resonate with the Doric style cap band. The finials on both ends of the body were bare celluloid and tapered into an eye-appealing nice little point, which is the same way a typical Doric will. There is also a ring between the main barrel and the blind cap, the same as a plunger filler Doric. With these comparisons, it is not hard to understand why the visual outcome of this pen can just eclipse other slim pens.

The general condition of the hardware is pretty good, including the nib and section, the only flaw could be the little wear-out of the coating material of the ring under the blind cap, which is acceptable.

As for the filling system, it features a bulb filler (or a button filler) underneath the blind cap. Guess the ink capacity of this tiny pen? Fifty drops of ink! I can only imagine that the hallowed room within the body is nothing but a gigantic ink reservoir.

The nib has a classic flex nib look, and its feed was engraved with the abbreviation “FL,” which probably means flexible. The heart-shaped breath hole looks great and is sitting right in the center of the long slit.

The cap could be nicely posted, and when posted, it gives the pen to a unique balance to handle, quite like holding a slim Chinese brush pen to do a traditional landscape painting. Why? Cause it gives out a feeling of ritual. I hope the following pictures depicting the comparison between it, a Parker 45 and a Neponset could bring you some idea about its performance.

The first week after purchasing this Stenographer, I used it to take notes during lectures, and it worked well. The narrow width of the nib also left me with extraordinary vision over the comments I was taking on the class handouts, and the thin and tall posted body enabled me a great maneuvering room. Syd Saperstein implied several times that this is the very pen that each CFA or accountant should have, which according to the week I spent with it, the reason was apparent. Even my classmate sitting beside my table asked me about why I was pushing a small pen like this so hard, and it could bring lines that varied so much.

The Great Service from John

I put it back to the drawer right after the first week, not for any issues from it, but because I found it was hard to find another one even online and I don’t want to give a vintage pen too much duty.

However, when I open the little drawer again next time on a hot summer night, I found there was a small hole growing at the end of the sac. By that time, I was perplexed by the trivial of moving into my new apartment and dealing with my internship up in the Bronx, and on top of that, my flight back to China was approaching.
But I still want to bring this pen back to China during the vacation, so I emailed John right away, and he got back to me the next day telling me to let him fix it. The next day the USPS store in the Bronx was closed, sadly, so the mailing date got postponed for one day more. John fixed the pen right after he got it and set it back the same day; he emailed me as well telling me he hopes it could arrive on time.

Luckily, it showed up two days before my flight took over. Along with the restored bulb filler, a beautiful hand-written card from John was also inside the box. Good job, John!

Becoming A Star in China 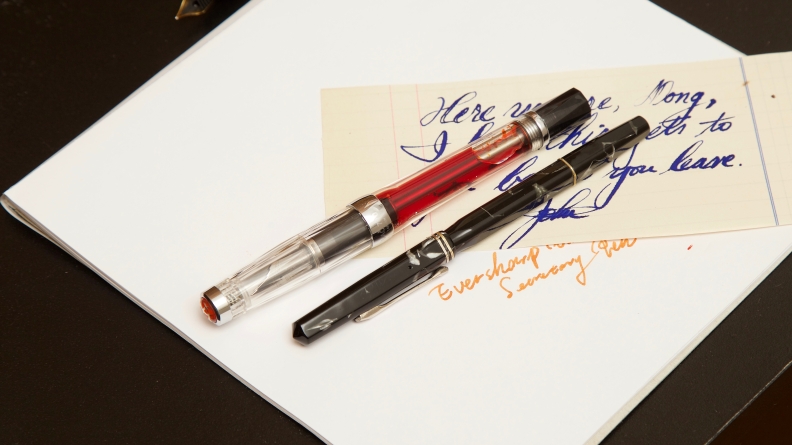 I brought back many American pens during my summer vacation and showed all of them to the local community in Shanghai and online forum, the Baidu Tieba. Among the pens I showed to them, some are quite exotic, such as a Balance with factory stub nib, a Kaweco V14S, or a Franklin-Christoph. But interestingly, this Stenographer stood out both offline and online, receiving more welcome and applause.

For the offline meetups, my ex-boss couldn’t help to take a whole bunch of pictures of the facet design, and one Chinese calligrapher was also amused by the flexibility of the nib and produced amazing works. Even people who were first into the world of the fountain pens would want to buy this pen right after playing with it. In a word, this Stenographer was such an unexpected phenomenon.

The forum post of this pen has arisen a new discussion about the Doric line and the ‘flex spirit’ of the then and the current Wahl-Eversharp. I also introduced Syd’s outstanding record of turning a hobby into an exciting business practice to the Chinese community. One warm-hearted collector even suggests that if Syd wants to revive W-E’s business in China, he could harness one great transliteration of the brand name back to the war time China–“爱勿释”（which means “Love it, so never part with it” in meaning).

I forgot to bring some of the brilliant calligraphy written with it this time, maybe in the future I can follow up this post with some pictures. Afterall ,though not the most expensive vintage pen in my collection, I am still being enamored by this Stenographer due to its mixed style and agility. Wish the Wahl-Eversharp could revive this model again, and great thanks go to John who gives me so much fun to own this Stenographer.

3 Replies to ““Love it, so never part with it.” | The Stenographer by Eversharp.”