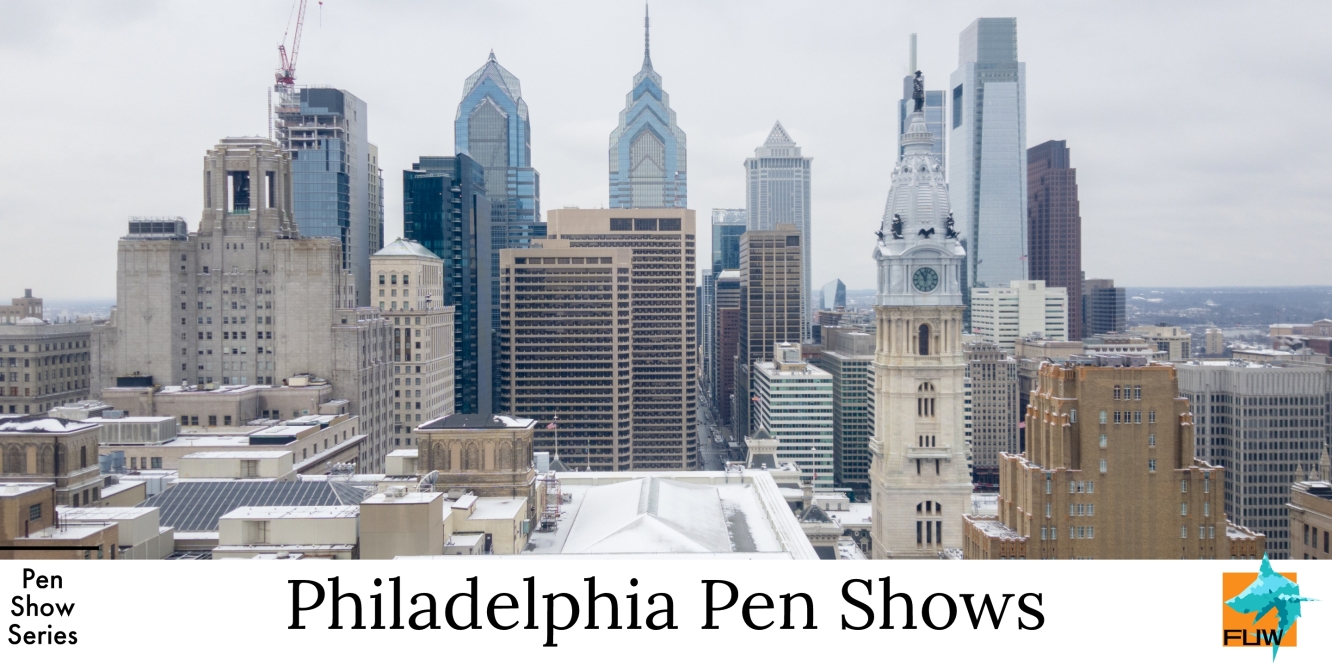 When I was new to this hobby, I heard from a senior member of the PenBBS, the Chinese counterparts of the FPN, saying that once you get deep into the hobby, it is always about the people, rather than the fountain pens themselves.

I didn’t buy into his theory at all.

How could a pen enthusiast turn his back on the object of his or her love and focus on the contacts acquired during the trading or sharing instead? Love me, love my house? Yes, the growth of personal relationship may be a reasonable and healthy development, but nevertheless, the primary object of this community should stay the same, isn’t it? Nevertheless, to the younger version of me who was in the freshman year, that theory sounds awfully wired.

But now, setting in front of my desk early in the morning, before work, reckoning the things that happened recently, I have to concede this theory does sum up a large part of our human lifestyle.

This is my third year of Philly Pen Show.

2017, I went there alone. As my first pen show ever, I was extremely nervous, grabbing the limited cash I planned in my hand. Standing on the entrance of the ballroom, gasping for the sheer size of the booths, I was greeted by Richardo Fernandez in the first place. “Take your time, hold your money, my friend. Talk with people and learn in the first place.” That was the words from Richard that I can still record today.

Having taken his words by heart, I ended up knowing Susan Wirth and her friends, Nevil, Barbara, and Deborah. Later that night, I had my first lobster roll from Luke’s Lobster.

I bought a Parker 45, a Sheaffer’s Balance with a factory stub nib for my first Philly show, from Hirsch. I stayed in Philly for one more day since my spring semester hasn’t started yet. The next morning I stayed in the lovely Rittenhouse Square park, stared at the street view of Philly, which is drastically different from New York’s. The Parker True Blue with a $510 price tag is one of the nicest vintage pens I saw during the show, but it is certainly out of my range.

My 2018 Philly pen show was accompanied with my newly acquired friend from Fordham, Derek Wan. He is an audiophile, a salad lover and a die-hard fan of Shinola. But he just couldn’t find a fountain pen that enamored and delighted him, even after the show. Maybe we were too concerned about our future of staying in the states and finding a job that meets our Optional Curriculum Training’s requirements.

I talked with John Corwin who sold me a mind-blowing Eversharp Stenographer and served it well. But I didn’t buy anything from him this time. Instead, I was informing him that if I could not find a full-time job in the area of marketing, this might be my last Philly show.

Besides the Retro 51 ‘Surfin’ rollerball from Dromgoole’s, I also got a Kaco Sky II from the sweet ladies of the pen world magazine to do a review on. By the way, the shooting star necklace I encountered is so beautiful, I bought it for my girlfriend without too much think.

We rode the Greyhound down to the Philly and got back within one day.
Besides the show itself, we ate, drank and walked around as far as we could since we got a bus to catch around 10 pm. I can still recall the moment when he was licking the Shinola watches in the Nordstrom Rack while I was still envisioning about the Samsung Galaxy Note 8 we just played with. Maybe because were both desperately trying to get a job.

We didn’t forget a lobster and crab trio at Luke’s Lobster.

For me, this year’s Philly Pen Show actually kicked off last Thursday night on the table of the monthly meeting of the Big Apple Pen Club, where I purchased a legit Parker True Blue from Wesley, who was going to the Philly the next day with that pen to sell.

Derek and I booked the Loews Hotel in downtown Philly, only to enjoy the view and the swimming pool there. Did we make it? Yes, we did in the last minutes before checking out. We were so tired after our weekdays’ works and kept on sleeping Sunday morning.

But one significant thing happened this time for the pen show experience is that finally, I got the chance to sit down and have a nice dinner with Richard. Ever since my first contact with him in the 2017 show, I have been trying hard to arrange a more personal meeting with him. I bought a Fatboy Ballpoint Pen from him during the 2017 Pelikan Hub, but not until some time around August 2018 did I have the chance to pay him finally. He was quite busy for the whole 2018 and for the most occasions, our meeting schedule didn’t overlap. Luckily this time, Derek and I arranged to have a Saturday night dinner with Richard. During the pen show mixer session, Richard broke into the room and told me one hour later, see him and George in the lobby.

It was a decent Chinese restaurant, with a fish tank in the front yard–which is a default setting for most of the restaurants in China, and a crew of nicely dressed waiter and waitress. To my surprise, regarding ordering Chinese food, Richard knows more than what we anticipated. Peking Duck was picked for a starter, to counter the possible sudden fulfillment by the roasted duck meat, we had black tea and Coke in place. Since I have been living in Amoy/Xiamen, the city right across the Taiwan Strait for my undergraduate years, I also ordered Chinese style clam soup. Derek planned a Cantonese style shrimp dumplings for Richard and George as a surprise, but that didn’t play out well.

It turned out Richard knows way more Chinese restaurant owners than us and has been served with all kinds of Chinese food in the New York City since 70s.

“I brought your boys to your place!” Richard told our waiter and the foreman. We enjoyed the dinner a lot. Not just another night spent in the Chinatown. It was snowing outside when we got out. Beautiful.

I bought a near mint Parker 180 in sterling silver, a Sheaffer’s squeeze converter and a Karas Kustoms original Ink fountain pens this year, using the cash I took out from Joshua’s wallet. Thanks a lot for JJ Lax Pen Co‘s newly opened banking department! Later I heard that Richard also has one with original converter, box, and paper… Will take a look into that soon.

The Oyster House my girlfriend treated me in the early days of our relationship was closed the following Sunday, which drove me and Derek into another seafood restaurant to finish our last meal in Philly–the Devon Seafood Grill.

Guess where it is? Just across the Rittenhouse Square where I sat two years ago. Till that moment, Derek hasn’t meed the WOW pen for him yet, but I was not in a hurry anymore to usher him back to the Pen Show ballroom. “Take your time, let him discover himself.” That’s what Richard told me the previous afternoon.

Thus we eat dozens of Beau Soleil and Katama Bay oysters, and drink, and hit the bus with bags packed with pens and memories back to the hectic, chaotic, but somehow still exciting New York lifestyle.

(I wish I could do a better job recording the whole mixer session, but on some table I was so engaged in listening. Great job for other hosts as well. I also missed the workshop offered by Azizah. Save that for the next time.)