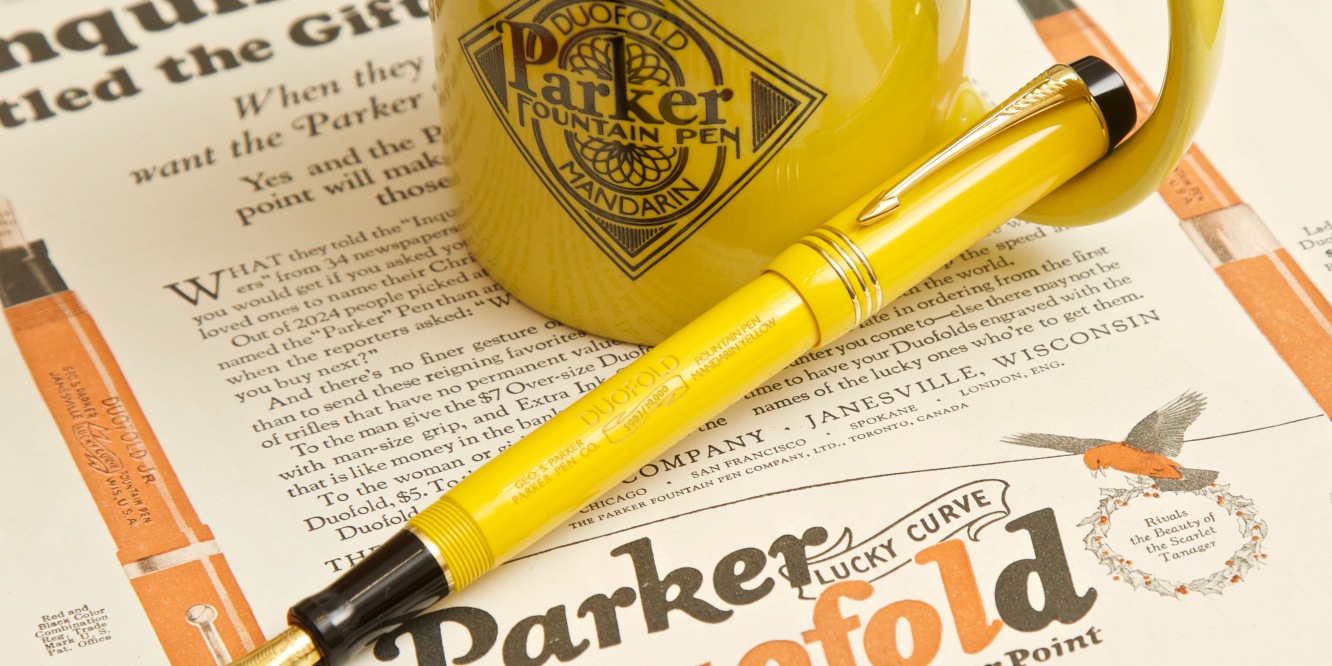 Deciding on a modern-day Parker Duofold was never easy. I did acknowledge the fact that the Centennial was brilliant for its craftsmanship, and the resin quality was never compromised either in the smaller International ones. But I just missed a force to pull the trigger for me.

Wayne Wu, my college-time roommate, also a pen-addict, has been playing fountain pens as me throughout the years. Restricted in the budget during our college time and always breaking the bank after graduation, both of us choose a rather slow and restricted routine in developing this hobby. In the same manner, none of us has ever shown any interest in actually having a modern-day Parker Duofold.

But one thing was in common when we saw the amazing pictures of a 1995 Parker Mandarin Yellow: we were both genuinely intrigued and calculating the way to buy it. We just can’t resist the rich-yellow glow emanating from the resin and the precisely-cut edges of every part. I mean, just look at how subtle and satisfactory it is when your look into the engraving in the acrylic body; it is detailed and rigorously perfect.

Luckily, this time Wayne’s position was more superior than me: he is still having his job while I am a full-time student here in the states. So, without too much due, he made up his mind and pulled the trigger. Since there was some friction during his part of placing the order, so, bizarrely, this pen was purchased by me and spent two months staying with me. I now can say confidently that without a single doubt the Centennial Duofold certainly worth your attention and this very model should be one of the best representatives of them.

A little background here: the original Duofold Mandarin from the 1920’s inspired this modern Duofold, a time when Parker was working hard against its competitors, also a time when the traditional colors in the Duofold line could no longer gather attention.

The color of the original Duofold Mandarin was the result of a Cloisonné vase George Parker purchased in Japan when he was traveling around the East. Because in the 1920’s, everything from the East could potentially be popular, he decided to add this yellow color into Parker’s nearly-stagnant Duofold product line as the 5th color. He called this yellow Mandarin, a word that deeply rooted in China.

In the dictionary, there are two sources for the origins of the word Mandarin:

With that said, it is a clear that Parker chose this name in purpose to stimulate the market. The official name given to this color ranged from the “Imperial Yellow” to the “Chinese Yellow,” and then in 1929, finally, the “Imperial Mandarin Yellow.” Maybe in the mind of George Parker, this color resonates mostly with the Chinese political-identification system. Sadly, I can find no clue about what kind of Cloisonné vase he bought exactly, however, base on the similarities of the color itself I believe it is possible that he bought a vase produced in the Qing or Ming dynasty.

Anyway, I managed to obtain an official Duofold Mandarin Yellow themed mug via eBay, and the color of it is just as lovely as the pen, and it was made in China, too.

Besides the color, the details and precision achieved here by the machinery were anything but amazing. Thanks for the high-definition pictures, you can see the structure and texture of the engravings and the channel of the thread in the main barrel. The transition from the finial to the main body was also neatly done in a seamless style, leaving a mirror-like surface and at the same time, showing off the precision and accuracy of Parker’s production power at that point.

Looking back to the body works of the original Duofold Mandarin Yellow, which ironically was called “Permanite” by the time, it has been well known for its fragility, aka the nightmare of Mandarin collectors. A hairline-like crack or something as tainted color or eroded spot is the default condition of the original Mandarin pens.

Things changed a lot when Parker’s engineers in Newhaven were contemplating about the new Duofold pen in the 1980’s, according to Tony Fischier:

It was to be the most modern fountain pen to date. With a ten-day computer controlled manufacturing process, and made from over 130 components it was subjected to 100 quality tests. … The body was made from solid rods of a very sturdy acrylic known as methyl methacrylate, with a trim of heavy plated 23K gold.

And the results is that once you hold one of them in your palm, you will love the jade-like smoothness and the feeling of harmless, which is what I was experiencing during the past two months. Hardly anyone has complained about the performance of the resin quality.

In this Mandarin Yellow, besides the greatness of the new acrylic from the modern Duofold, I also found a little trick Parker used when it lathed the raw acrylic: it is not an evenly cut body design in side the barrel. Thanks to the lightness of the yellow color, I discovered that the rotating drive did not finish the shaping process with a single stroke, rather, it cut out the inner room out in a manner of different stages, leaving the resin a different level of thickness.

By doing this, the weight of the Centennial Duofold is therefore added and more balanced towards the end of the pen when the cap is posted, mimicking the feeling of a same size piston filler since the extra thickness weights as if there is a piston there. In comparison, I can see no such a design in my Sailor Fresca Blue’s main body barrel; therefore the Sailor always feels a little flimsy when unposted.

According to the Tony, the 18k nib used here in this Mandarin is more likely to be the MK I of the modern Duofold, and it was not simple at all:

The large nibs alone, punched out from a single gold sheet, had 21 production stages. Parker boasted that the nib was the largest solid gold nib in the industry. They were hand-slit with a blade fine as a human hair and finished by tumbling for 48 hours in a barrel filled with walnut shells, and then hand polished.

The nibs were offered in four standard grades and 22 non-standard. Initially the customers had a choice between a 14K or 18K nib, but the 14K nibs were discontinued in March of 1989. The nibs sported an attractive ruthenium arrow motif, and the tips, often referred to as the “iridium,” were also made from ruthenium. Ruthenium is a very hard metal that belongs to the platinum family and is inert to most chemicals. The ink feed and collector was computer designed and built not to leak at any “normal” plane altitude, by controlling and regulating the ink by sensitively adapting to atmospheric pressure and temperature changes.

While by many critics the original Mandarin writes ‘as firm as a ten penny nail,’ this modern Mandarin does offer some springiness and fun when I test it with distilled water. Since this pen is not mine, I decided not to ink it up, and I hope in the future Wayne, who happened to process several MB 146 and 149, could give out his retrospection over the performance of this flagship nib. 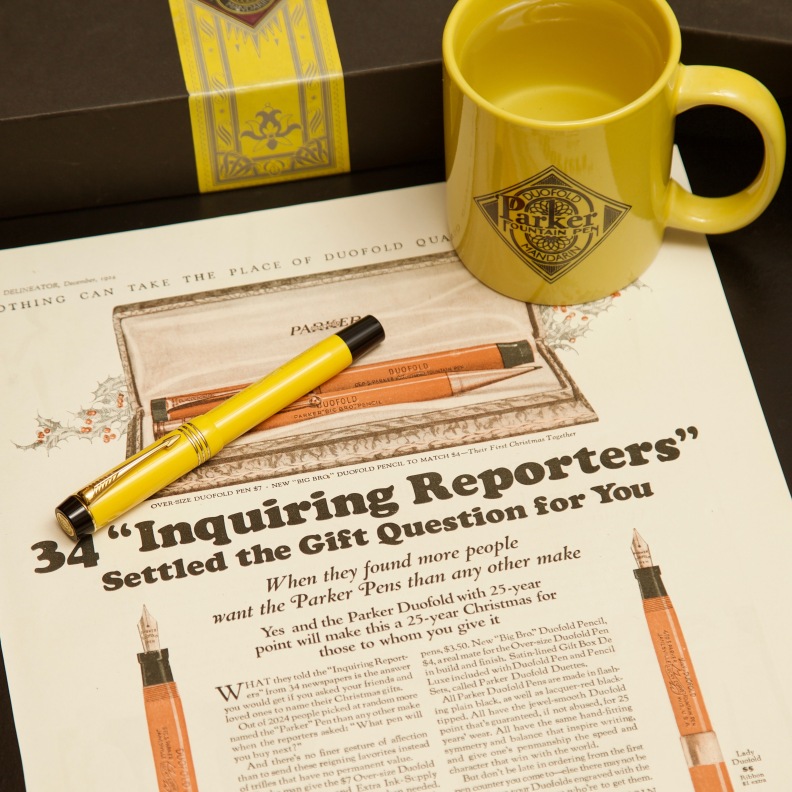 The Centennial Duofold was first produced in the year 1987, and in 1995, Parker produced the limited edition of the Mandarin Yellow Duofold with 10,000 fountains pens created. Just like its ancestor, the 1995 Mandarin Yellow was the first bright color added to the lineup after the orange. But unlike its predecessor, it didn’t manage to become a part of the regular line for the reason I can only guess. It is an excellent idea to rebirth this legendary color and name again, after all, and maybe the market reaction was not too bad—Parker re-launched two more variants of Mandarin Yellow Duofold respectively in the year 2006 and 2013.

The price tags of all these pens are quite hefty, but with all the legacy, quality and rareness they carry with them concerned, I can hardly not to applaud them. They are the perfect resurrection of this heritage brand’s trendsetting products, most importantly, they pulled the trigger in my mind to have one of the Centennials.

Thanks again for Wayne Wu’s trust and generosity, MyUberPen’s great shots, Tony Fischier and the acute awareness of Annie Marie, who picked out the Mandarin mug in a flea market. There are no financial rewards affiliated between them and this post.

One Reply to “A Designated Resurrection: the 1995 Parker Duofold Mandarin Yellow.”