I was enjoying the Spring Festival with my friends in Pittsburgh when the work stoppage by taxi drivers at the JFK airport made itself to the headline. Hearing the news, I was thinking: will the strike stir up my arrangement after I get back on the next Monday?

Fortunately, everything went well to me two days later.
Unfortunately, for Uber, the movement of #DeleteUber went on and on, resulting in losing 200,000 Uber mobile apps among its users.

As you may have known, this is the backlash towards the Twitter sent from @Uber_NYC that night.

After sorting out some of the key element, I think three primary reasons contributed to this catastrophic event for Uber, and this post will develop around them.

A Series of Misreading

Throughout the storm of protesting D. J. Trump’s travel ban along with the boycott against Uber, several misreading happened.

Initially, what did @Uber_NYC mean when they decided to post the decision to claim the “surge pricing” had been turned off?
Usually, in the face of high demand for rides, Uber is notoriously known to opt for a “surge pricing” strategy to balance the demand and need in particular area, charging a much higher number than the daily amount. Such a tactic has never been short of criticism.
Cheerfully, this time the information conveyed through the initial post was anything but hyping the price. By turning off the surging price, Uber was implying it has no attention to take drive more profit from the potential surge of demands after the one-hour strike of taxi workers. Please be patient, the post said.
However, the reaction towards Uber New York was immediate and not moderate: “#DeleteUber” began to trend on Twitter and last for days. Some users declared they are done with Uber for its trying to undermine the work stoppage and drive up sales, while some were quite unhappy with Travis Kalanick’s being in D. J. Trump’s business advisory council.
Why did people misread the intention behind the tweet?
In the social media communication, the lack of context could easily lead to an imagination of fact, and in this case the term “surge pricing” without further explanation or justification. Once this post got retweet negatively to people who are not that into Uber’s products, its language was literally prone to convey a feeling of undercutting (through turning down one’s price) taxi drivers. The emotionlessness of the stately words within the post might have acerbated the suspicion that this is a reactionary post for Uber’s users, alerting them to take the advantage after the stoppage.
Then, why did people opt to lash out at the issue of the economic advisory council? This brings us to the second misreading. This time is a backfire caused by a hyperlink. 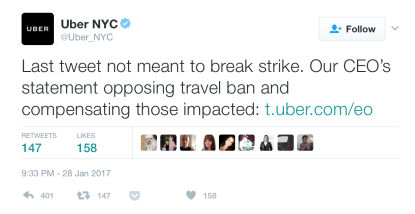 According to the Atlantics, both this tweet and Uber’s response to users who deleted the app pointed to the same Facebook article written by its CEO Travis Kalanick hours before the strike, and here things become tricky. Within that very article, Kalanick not only gave out the opposing statement of the travel ban, the compensation arrangement, but also the determination that he would try to continue his work in Trump’s economic advisory group and change the administration’s travel ban from within through “speaking up and engaging.”
But considering the usual anti-authoritarianism position towards governmental affairs from Uber (think about its recent ignorance of California DMV), why there is a special advisory council with its CEO in it for this quite controversial administration? It is hard for an agitated protestor to not interpret such kind of relationship as a futile and peril gesture for Kalanick.
Here, Uber’s PR team apparently overestimated the ability of its audience across these two social platforms to decode their assuaging information correctly, especially during such an unprecedented political chaos. At that critical moment, a lengthy and old team email that illustrate many issues all at once is the worst communication material to turn to if you want to persuade a bunch of audiences who may have already been suspicious and angry at you. In other words, the whole #DeleteUber movement might calm down quickly if they 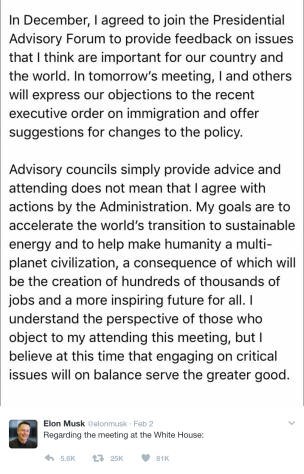 published a succinct clarification over the issue of surge pricing rather than team email.
As for how to address the problem of being on the advisory council?
Just look at the way Elon Musk justified himself—one theme at a time, high enough to prevent the flooding ill-comments in Kalanick’s case.
But here comes the last and the fatal misreading during the whole event, which is the public interpretation of the dramatic quitting of Kalanick in the eve of the first meeting of the economic advisory council.
In the first place, quite contrary to the previous public posts, which from either Kalanick’s personal account or Uber’s city account, this time the quitting message was leaking to the outside through an internal memo obtained by The Associated Press. Then there come the ultimate silence from Uber’s spokesman and Kalanick himself, whose idealistic posts on Facebook and Twitter about harnessing the position on the council stood there intact without further follow-up.

While to make the situation even worse, that very Thursday also saw two major protesting specifically pointing to Uber broke out separately in Pittsburgh and New York City, both under the banner of #DeleteUber while pursuing their agenda. The Pittsburgh’s protest was targeting at the driverless car project and Uber’s partnership with the local administration, while the New York’s protest was claiming Uber’s low wages were so-called Trumpian. Labor groups arranged the former one along with progressive activists, while some taxi workers participated the one in New York. Both of them have an apparent conflict of economic interests with Uber. Sadly, none comment was made from Uber’s spokesman, and protestors were rather confident that their movement was paying off.
“Who knows why he did it, but it’s not a coincidence that he announced it 10 minutes before we were protesting outside his office.” One protestor in New York said that day, according to an Recode report.
The dealing with the advisory council is crucial. Treat it honestly and actively; you could reverse the whole crisis and make it clear to the world what kind of role Uber want to be in democratic affairs. Handle it in an avoidant manner, just in this case; you will see more people will begin to question the credibility of Kalanick’s commitment and add more weight to the impression that Uber is still of ultra-opportunism.

It might need more time to reveal the profound adverse effect over Kalanick’s quitting, but the news on Friday had simply proved the significant hurt done by this movement: 200,000 people said good-bye to Uber app and for the first time, Lyft eclipsed Uber in the App Store.

The Victim of Butterfly Effect

Some said Uber has itself to blame in the first place for their long-existing arrogance and bad reputation among its partners. Such Comment is true, and this time, the long-standing grievance turned out to be the fuel of bigger protests across the social platforms as the result of viral communication.

However, it is still good to know in the first place that Uber was not officially a part of the strike. So far no evidence shown that the organizer of the work stoppage had aligned with Uber before. The fact that both Uber and Lyft operated as usual during the one hour of stoppage demonstrated that these are simply two different systems despite their members share the same road and routine, doing the same business. It is entirely unreasonable to blame Uber to be a scab when the strike was arranged by an opposite group of people who has been speaking ill of Uber for years.

Bear this in mind, then here comes the man who started it all with his inflammatory and intuitive remarks:

Providing how much anger and hatred there are across the U.S. at this moment, it is nature for such revenging go viral.

I must concede when I was addictive to Twitter-like social platforms I did re-tweet a lot of highly depicted posts which later turned out to be an embarrassment for me…… Surly there is some deeper issue behind the phenomenon of going viral. This time, I don’t want to dig too much into the reconstruction of the way this hashtag went viral. Please go and check the @Bro_Pair and @NYTWA yourself.

Being a Low-hanging Fruit

Here comes the fascinating part of the #DeleteUber movement: after all, an Uber app is quite a low-hanging fruit for you. Considering the occasion in which you may have come across a hashtag like this, probably squeezed not only by D. J. Trump’s controversial policy but also by your mundane burdens, there is nothing easier than uninstalling an App and share a screenshot of it in the name of being part of the protest.

Will you ban your children from watching their Disney cartoons for its CEO, Bob Iger, is on the economic advisory council?

Will you cancel the order of that promising Model 3 you placed last year in the name of boycotting the all-mighty Elon Musk who happened to be on the council?

How about check the brand of lightbulbs each time you entering a room and boycott all the lights produced by the quite suspicious GE?

The final tragedy of this event is simply Uber is such a service with low switching cost, leaving Lyft a free ride over its failure of communication. And when in the age of social media and mobile technology, many people choose to use the shortcuts just like #DeleteUber to express their initial feelings and ambitious commitment, most of which then sadly end up only within the realm of their touch screens…SAD!

(Disclaimer: the writer of this article has worked for Uber Shanghai for a period.)