The SKY fountain pens started in early 2016, priced at 39RMB ($6) on launch. Though KACO’s premium offerings have been largely neglected by Chinese pen lovers, the SKY did gain some traction within the community, but still miles away from being a “People’s Pen“. Last May, the SKY II was launched in the face of increasing competition from other pen makers. The SKY II shares the same design as the SKY but deployed some upgrades. Currently, you can have a SKY II from the Pen World magazine’s booth for free during a pen show if you get a subscription on-site. 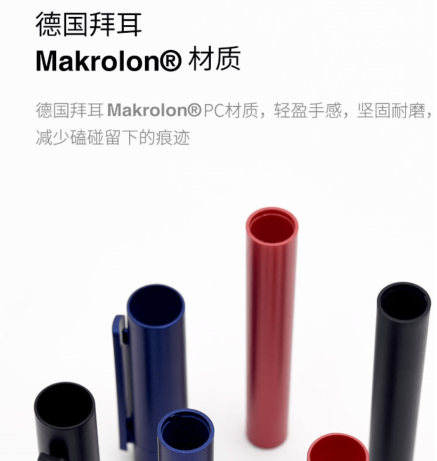 Makrolon and black Schmidt nib, that’s the key differentiators marketed by the company, and they make this pen the first KACO pen that I want to own. After two weeks with the pen, I am in love. Forget the cliché designs from legacy brands, this is the best entry level fountain pens that have ever been made in China. But the SKY II is also imperfect or even annoying if you want to pull it out from a student’s pen cup and make it part of your EDC since the company clearly neglects the need of having a functional clip.

Let’s start with the bright side. For 69RMB ($11) you will get a metallic-looking pen instead of one in banal solid color, along with a stainless-steel nib with extra black coating, and both of these two upgrades worth the money.

The metallic red barrel makes this review unit pops up easily in my pen collection and resonates with certain electronic gadgets. According to the KACO, the barrels of the SKY II models are made from Makrolon polycarbonate, a name that deeply rooted in the success of LAMY 2000. For the 2000, LAMY put glass fibers into the material and brushed the surface, resulting in a pen that feels like a piece of warm wood (I learned this expression from Myke). While in the case of this SKY II, KACO finished it by applying a metallic paint to the red Makrolon base, creating a texture feels like a piece of warm aluminum. The metallic coating is thick and scratch-resistant, and I only managed to see the red base material from the outside by scraping it off with a knife. I don’t know too much about the properties of the specific grade of Makrolon used in the SKY II, but the material did survive several chest-height drops along with the rubbing with keys in my pocket. Most importantly, it just feels smooth, light and warm in hand.

With SKY II’s black Schmidt nib, the KACO joins the bandwagon of high-quality stainless-steel nibs moving beyond the basic looks of being in either silver or gold. That delivers a striking look which transforms the feeling of this pen—no lights could hit the black nib and bounce back to your face during your writing, and when the pen is rest on the desk, the black nib gives it an understated existence. Another reason for me to love a black German nib is that I can enjoy any ink without caring too much about cleaning the nib, making the whole experience more focused on the writing part rather than the pen I am writing with.

Even the physical performance of the nib could change a little bit. The company reminds its buyer that the extra black coating around the tipping material would result in more friction in certain writing angle, which is true in my experience. Thankfully (or not?) this extra friction from the tip disappeared after days of use.

Regarding other basics, the pen is a cartridge/converter filler, and its black nib is of size 5, made by Schmidt and branded in KACO’s logo. Unlike the black nibs from Kaweco Perkeo, it is a firm writer. It is noteworthy that although the nib and feed look the same as every other pen with a #5 Schmidt nib, they can’t be easily screwed out, due to a unique design at the end of the nib housing. I am fine with this move since in reality, this is not a pen built for pen addict who has a dozen of spare nibs.

Besides the nib and the barrel, the remaining of the pen is basically the same as the first generation of SKY, which is still an acceptable design two years later. The cylinder shape is simple and minimalistic, if not as nuanced as design from LAMY Aion or Pilot Kakuno. The clip still features a KG stamp, representing the KacoGreen branding the company uses for its writing instrument, and at the end of the barrel you may still be perplexed by an F (it’s an EF-nib pen!), which means Fountain pen in the company’s explanation. All of these legacy designs are not ideal, but I can live with them. Nonetheless, I am rather glad to see the original design of SKY’s ergonomic nib section stays. That’s a really nice-looking grip, making the inside of the pen visible but not too distracting. The section also feels clear and crispy in hand, thanks to the unique surface pattern and large triangular construct.

But by this point, I must look on the dark side of the SKY’s design, which I really hate—the clip is more of a decoration than a real clip. The clip on this SKY II is still an injection-molded one, integrated seamlessly into the top finial, and it is just bad. Since the clip is of the same material as the plastic part, itself is loose and lifeless. To render it even more useless, the clutch of the clip was moved from the clip to the body of the cap. That’s a confusing design, and I can barely clip the pen to my shirt, my pen loop, or sometimes even a hardcover notebook. There is no way to deny this clip is more functional when acting as a rotating stopper. If you happen to be a pen user who loves to clip your pen, this is a deal-breaker

However, I still remember comments from Paul G, one of the Pen Addict readers, under the Kaweco Perkeo review—be alert about the target audience of the pen when we are reviewing it from a power user’s perspective. At a price around $11, the SKY II is super affordable and looks totally different from other entry level Chinese pens, and that’s enough to get it noticed. Comparing with clip-less student pens like Perkeo and Kakuno, the KACO SKY II is fine to have a soft clip, since students usually don’t clip pens and keep a big pencil case for their pens. Oh, did I mention the matte finish plastic package of this pen? It is a high-quality MUJI style pen case in nature!

To sum it up, the mark II version of the pen feels warmer, flashier, and way more confident in hand than its predecessor. Maturity and refinement are the keywords I always think about for this pen. Despite some lacks, it is still a legitimate upgrade and may lead a new direction for the KACO pens. 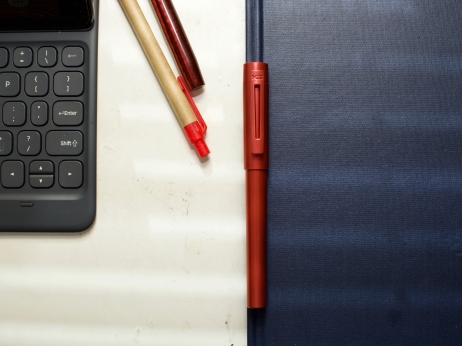 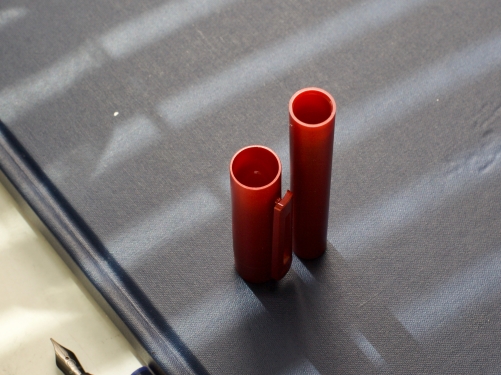 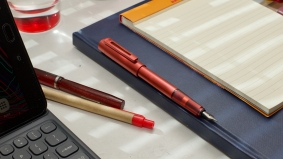 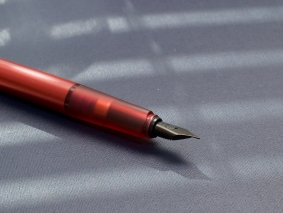